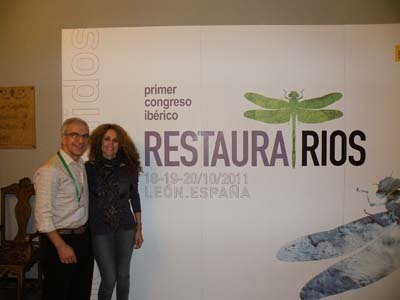 ECOGESFOR members presented results of the group’s research activity at three national scientific meetings in 2011. León hosted the First Congress on River Restoration, Lugo and Granada were the venues chosen for two meetings of working groups of the Spanish Society of Forestry Sciences, the one on Forestry Modelling and the one on Agroforestry Systems, respectively. A total of 6 papers were presented:

Diversity and production of the herbaceous stratum under the canopy in a pasture in the centre of the peninsula. Presence of Phellinus pini in Scots pine stands in the Sierra de Guadarrama: influence of seasonal and forestry factors . The penalised logistic regression: an alternative to reduce the intensity of sampling in ecological niche models. Hydrological planning instruction and the environmental regime of flows: principles, realities and pending tasks . Obtaining environmental flow regime (EGR) scenarios from the natural regime: a new extension of the IAHRIS software. River restoration of the Middle Ebro through the analysis of its ecological and hydrogeomorphological dynamics.

Don Felipe received in audience a representation of…

Pastures, cultural landscapes between tradition and the new paradigms of the 21st century

ECOGESFOR is participating in the organisation of the…

ECOGESFOR participated in the organizing committee of the…